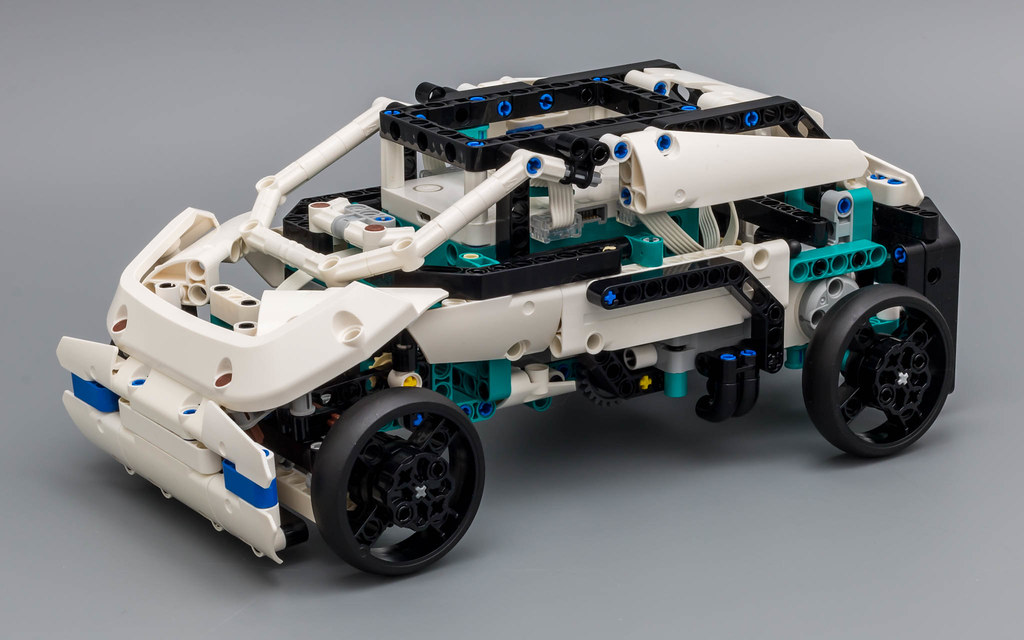 Recently we hosted the [TC21] Technic Transforming Vehicle Contest. The goal of the contest was to create a vehicle that transforms into something else. This concept had been on my mind for a while, since I really love the good old 8852 - Robot set. A set I didn't own back in the days (and still don't). I know it is super simple by today's standards, but I just loved it. I have said if before (especially in contests), but simplicity is a good thing. The contest ended up being slightly too difficult, but that's a different story. 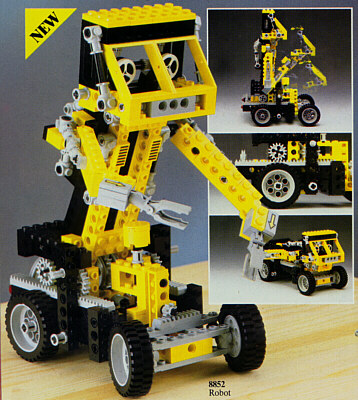 To my surprise Daniele Benedettelli created a topic showing his SARKIAP-1. Due to contest rules this entry wasn't allowed to be used in the contest (entries have to be new and never shown before). Obviously the model fitted the theme of the contest perfectly and I was in awe with that cute little transformer. So I contacted Daniele to explain why his model wasn't eligible for the contest and to express my feelings about it. I offered to write a review of the robot and he was kind enough to provide me with the PDF to do so.

PICTURES
Pictures can be clicked to view hi-res versions. My Flickr album contains all the photos taken for this review.

DISCLAIMER
This time there is no TLG disclaimer, but obviously I need to state that opinions are my own and they are in no way influenced by Daniele or Starch Press.

This review is not about the set itself, but about a book for models you can build with the following set. I have done a full review of the 51515 set in case you are interested. The book can be found as a hard copy or ebook at your preferred online bookstore, but here's a link to the Nostarch website.

The cover shows a guitar, which reminds me of the Boost guitar, using a distance sensor as well to regulate the pitch (if that is the correct term). Personally, I would have opted for multiple creations on the cover, but the guitar does look cool. 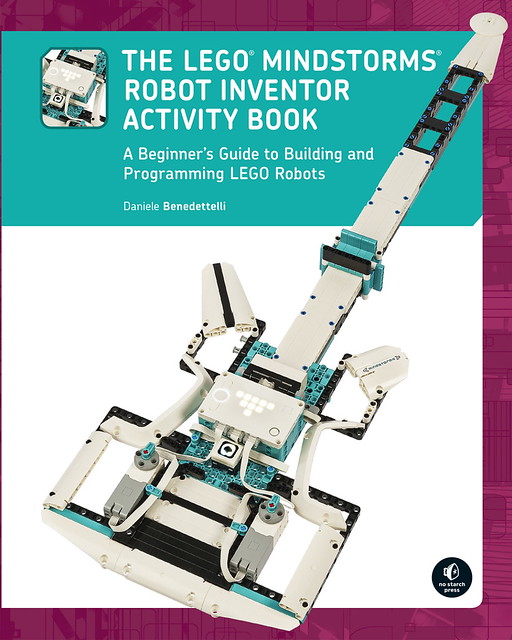 CONTENTS OF THE BOOK

A quote from the introduction:

All the models in this book can be built with a single LEGO set: the LEGO MINDSTORMS Robot Inventor set #51515. With this LEGO set and a device that can run the LEGO MINDSTORMS App, you’re ready to start creating any robot you can imagine. From a remote-control car that transforms into a walking humanoid robot to a guitar that you can really play, the sky’s the limit on what you can invent.

So, what exactly can we build?! Besides a "getting started" and a "where to go from there" chapter, the book contains seven creations and a word blocks reference guide. These are the different creations:

For the Pinball you will be using the box of the set, so don't throw it away. The Transformer (SARKIAP-1) which we will be building is probably the most intricate build.

The build starts with the biped part of the robot. The picture below shows the two feet which are operated by two medium angular motors. I am always amazed how designer use rotary movement to operate bipeds or quadrupeds. The rear wheels will be connected to the 2L axle connector later in the build, so the model walks and drives simultaneously. 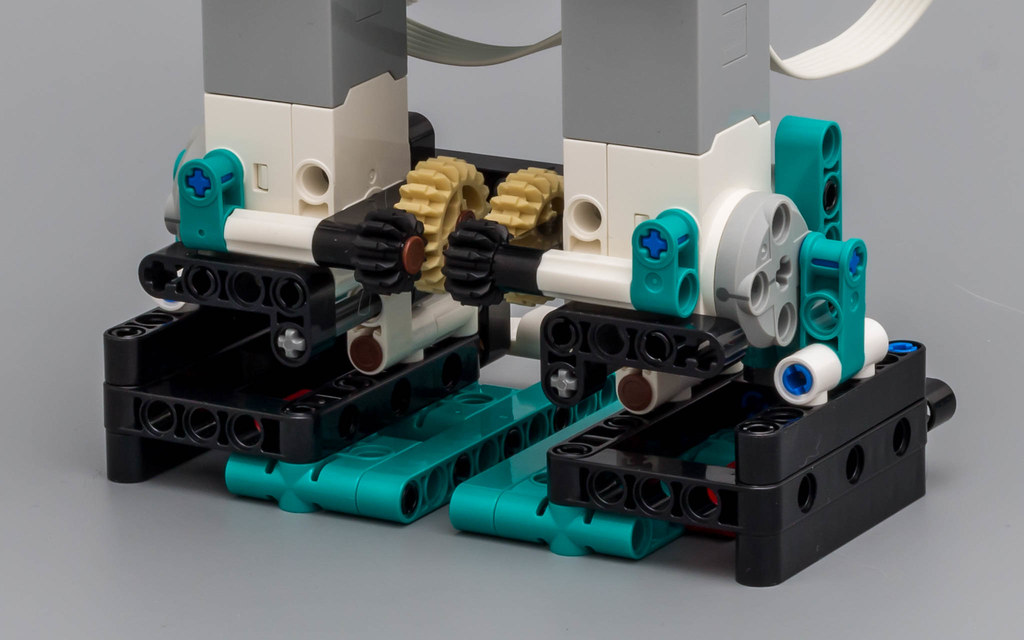 At this point you are finished with the biped and you will start writing the first program, unsurprisingly called "walking_robot". For this program we have attached the distance sensor, which will be removed before building the next part. 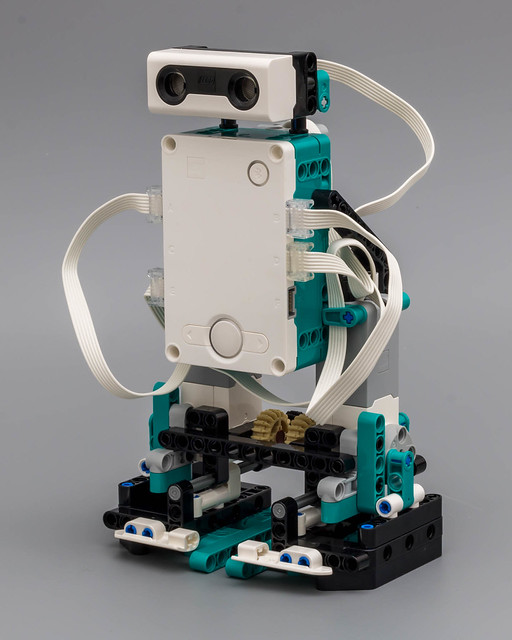 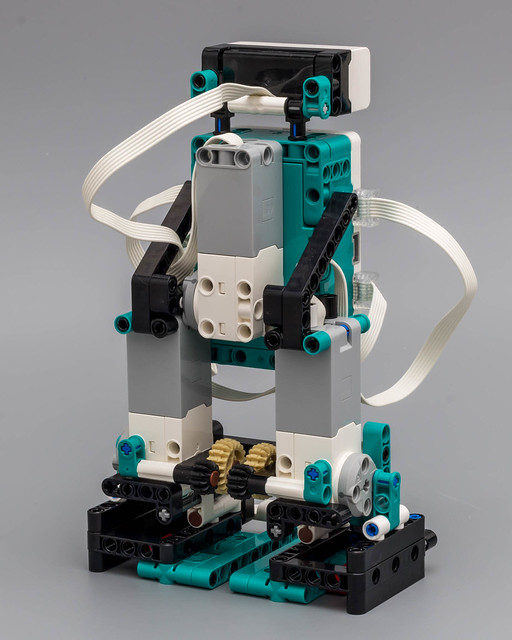 When I programmed the robot, I thought there was an error in the program, because the robot walked backwards. After a while, I realised that backwards will be forwards when you have completed the robot.

During the next phase you will be building the torso. The picture below shows I was building in a low light situation...or that my eyes are getting worse. I used a green 3L liftarm, while that one should have been a blue one (top right corner). 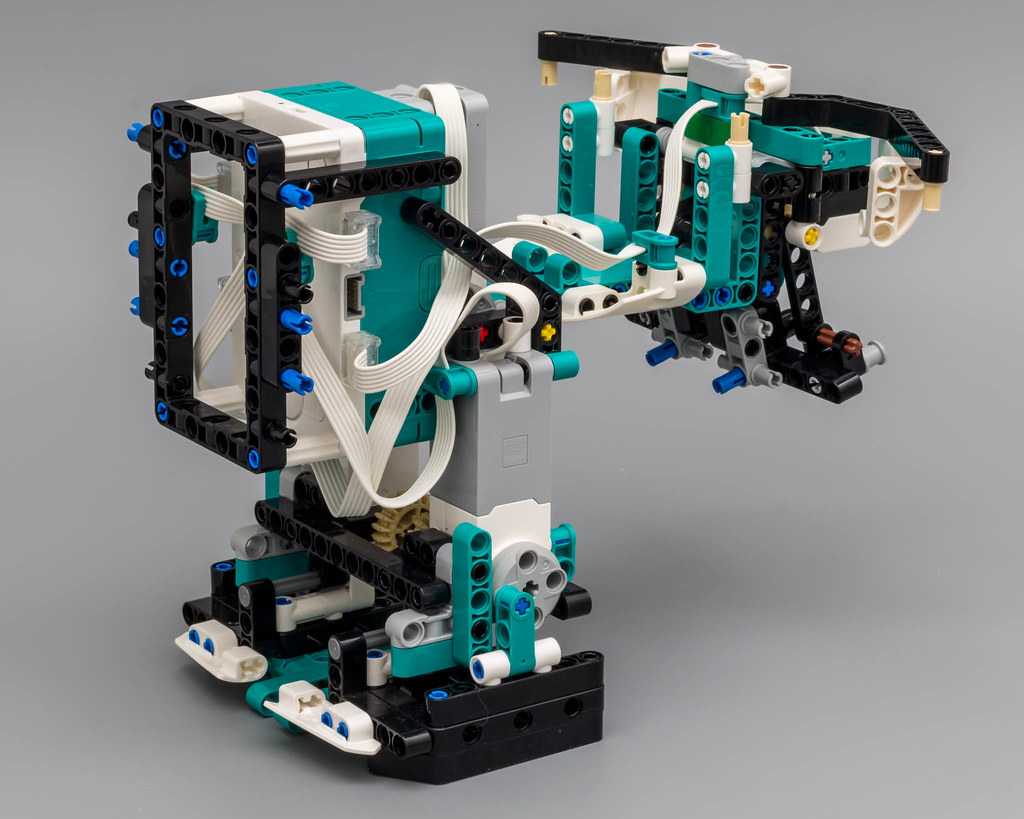 The 24T gear shows where the torso will rotate when it transforms from biped to car. At this point you will write a small program which rototes the torso to the upright position. 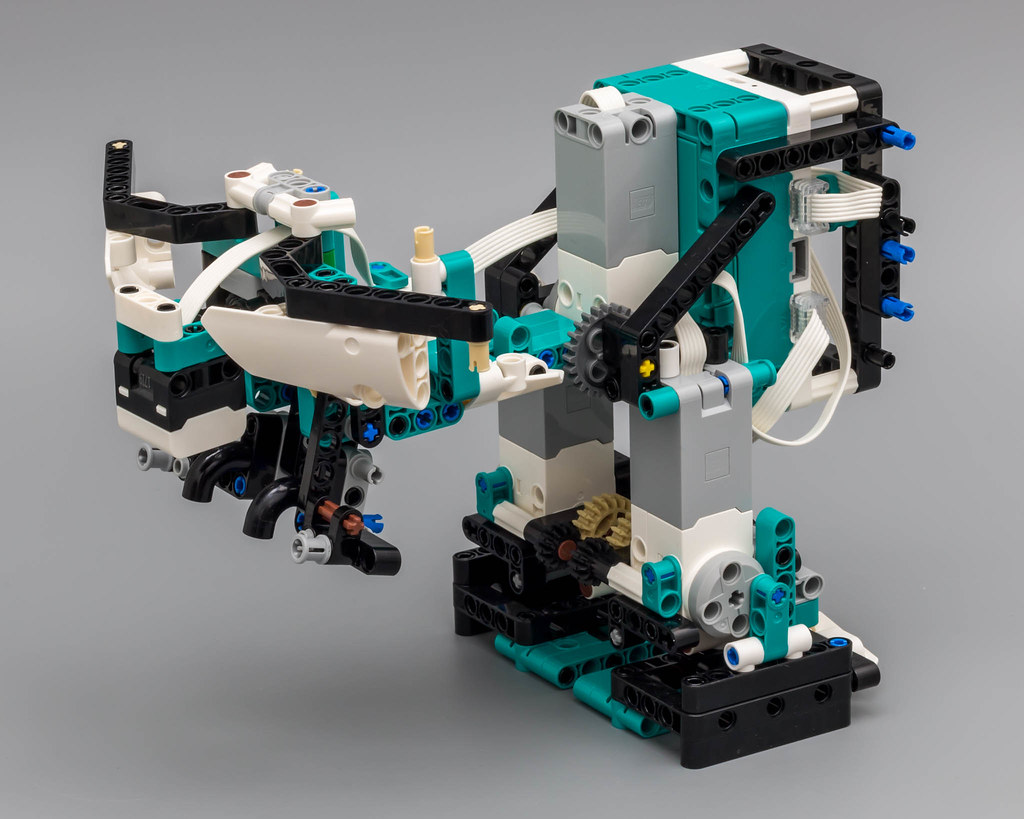 When attaching the "arms" you need to carefully align both sides, which can be a bit fiddly. It took me some time to properly align them. At least, I hope I did hehe. I'm sure we will find out later. The color sensor is used as the head of the robot. 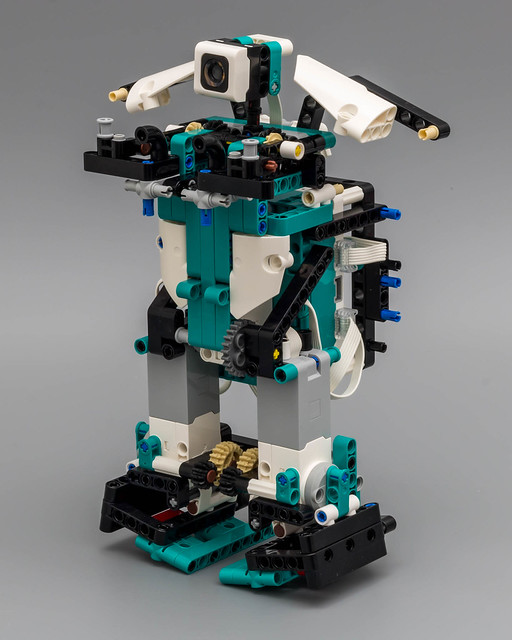 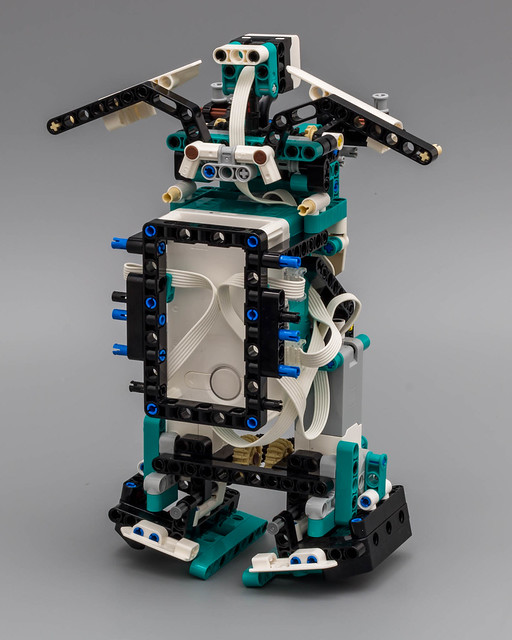 After moving the torso to the upright position, all it takes is completing the bodywork of the car. There is a minor error in the book, because page 70 is duplicated on page 72. Page 72 is the same build as page 70, but mirrored. Not a big deal. 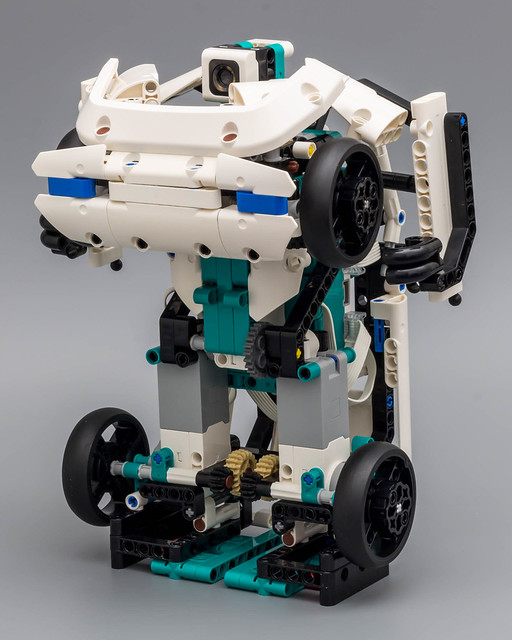 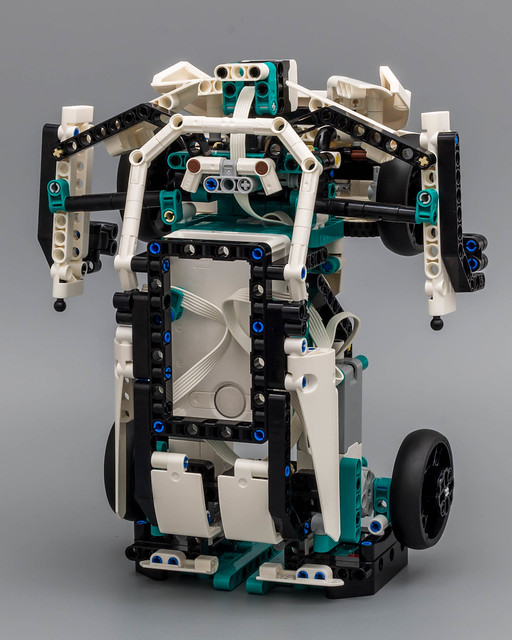 This is how the finished car looks like. Granted, it's not your average supercar, but I think it looks cool anyway.

A picture from the other side shows the feet which double as the rear of the car. Considering the limited number of parts, I am impressed by the build and the end result. 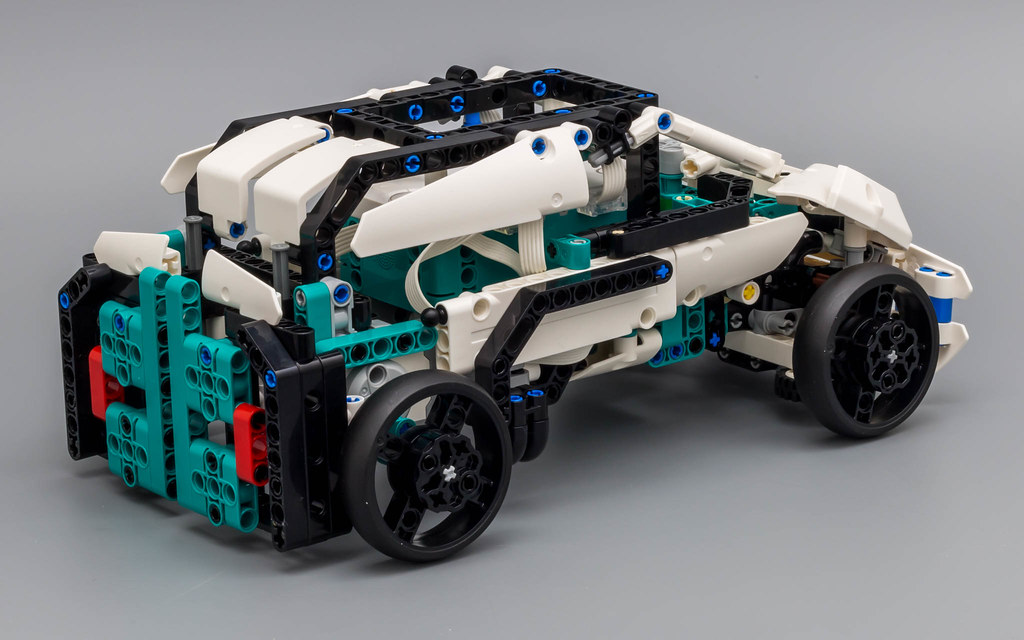 Of course building a robot is one thing, but seeing it in action is what it is all about. I have put together a video demonstration the funcions. I shot the video with a GoPro in low light conditions, so the start is a bit dark, sorry.

As you can see there are a few minor glitches when you operate the robot. One of the gears got loose and I had one or two shots where the robot fell backwards. Other than that, the robots works quite nicely. There is even a remote control program included, which allows you to operate the robot with your mobile phone. It's safe to say I had a lot of fun operating the robots and I did get more than one "Ohhhh's and Ahhhhh's" when I showed the robot to friends and family.

I really enjoyed building the robot. The build is obviously quite different from the standard 51515 models. The build itself isn't that hard, but aligning the arms can be a bit annoying. I loved the fact that Daniele has broken down the build into different steps and each step includes some programming as well. So you gradually see the biped coming to life.

If you want to do more with your 51515 set, this book will definitely help you with that. The book contains several robots, ranging from simple to complex. It is well written and the explanation about the programs is great. You really get the feeling you are taken along a journey of making robots. The blocks reference guide at the end of the book is a welcome addition. This will surely help people who need a little assistance in gettings used to how these all work.

I'm sure there are a lot of people who bought this set, for themselves or possibly for their kid(s), but it's gathering dust in some closet. That is a terrible waste of its potential. This book will add a lot of value to your 51515 set.

All things considered, I highly recommend gettings this book!

Thanks you for reading this review. All pictures can be found here.