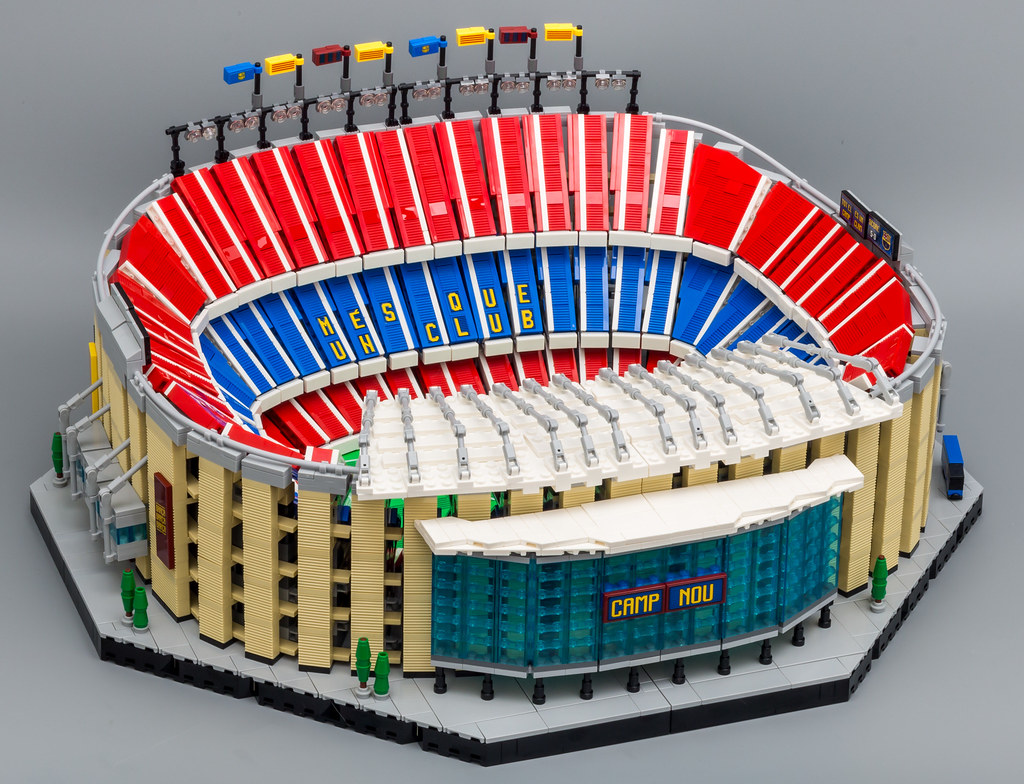 Welcome to my review of Camp Nou, the stadium of FC Barcelona. Being a Barca fan, I was excited this being the next stadium to be released (the first one was Old Trafford). And I was even more excited to be able to review this set. After the initial excitement (I hadn't seen the pictures yet), I realised that Camp Nou is actually quite a boring stadium. Seeing the first pictures confirmed my fears. At first sight, this seems to be a quite repetitive build. I do understand that most of the stadiums have some repetition, but the Old Trafford stadium looks like a more interesting build. I haven't built that one, so I can't compare it to this one.

About me being a Barca fan; I have been a fan for a long time, but I absolutely lost some of my love the last couple of years. They seriously screwed things up. But for the sake of this review, I like to remember the good old days when Koeman scored his free kick in the "Champions League" final in 1992, when it was still called "European Cup 1".  Obviously, the Messi era wasn't too bad either :wink:

PICTURES
Pictures can be clicked to view hi-res versions. My Flickr album contains all the photos taken for this review.

DISCLAIMER
The CEE Team of TLG has provided this set. It's not my goal to promote this set. It's my goal to give you an honest opinion about it. Therefore, the opinion in this review is my own and is in no way linked to TLG.

The box is exactly the same size as the Technic CAT. Weighing in over 5kg it's quite heavy. 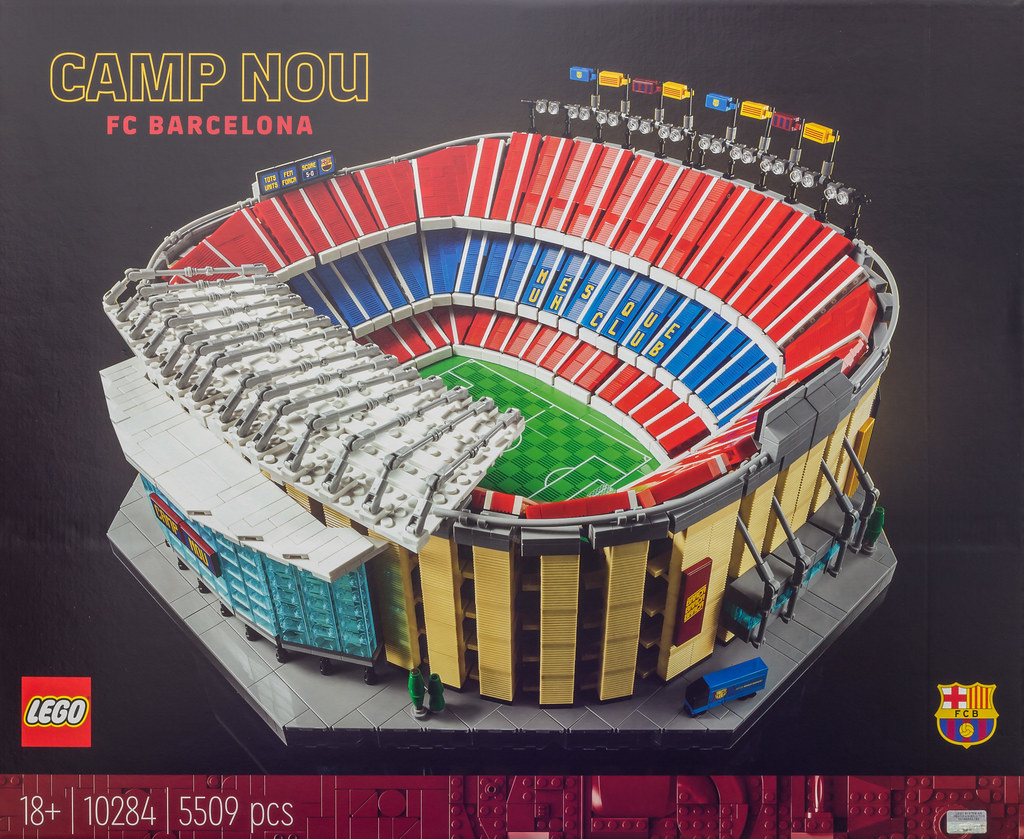 The back shows the stadium will consist of a pitch and four quarter stadium parts. 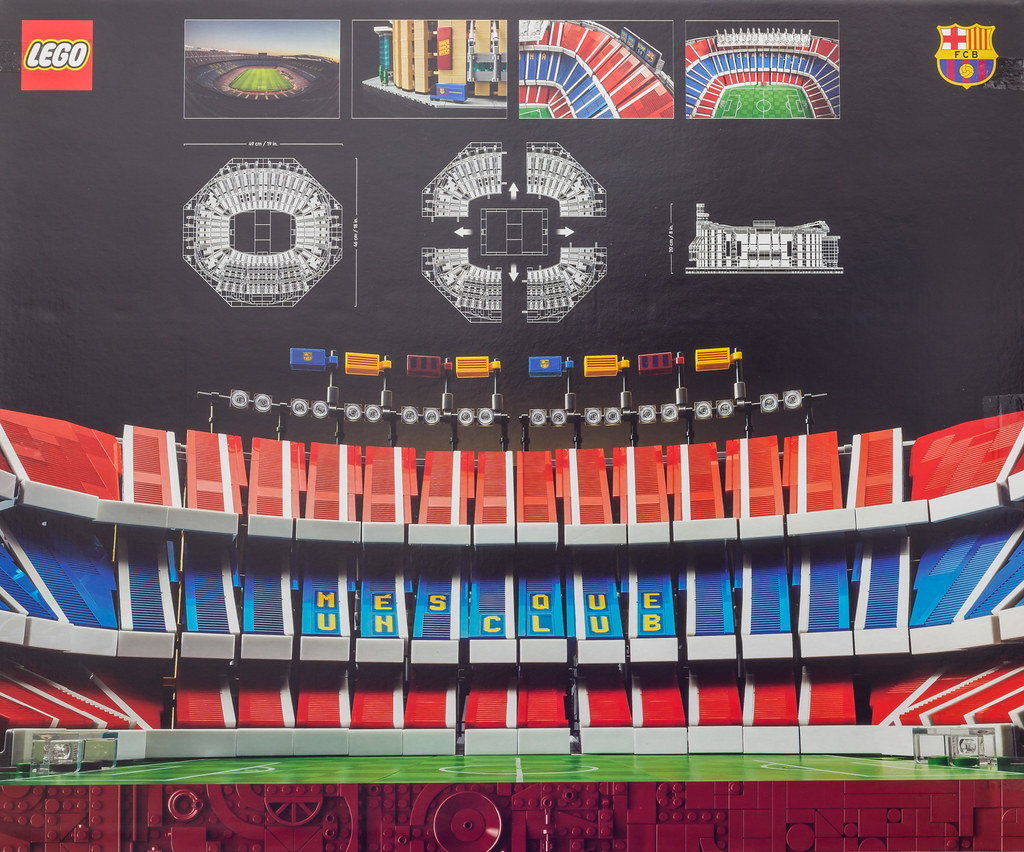 CONTENTS OF THE BOX 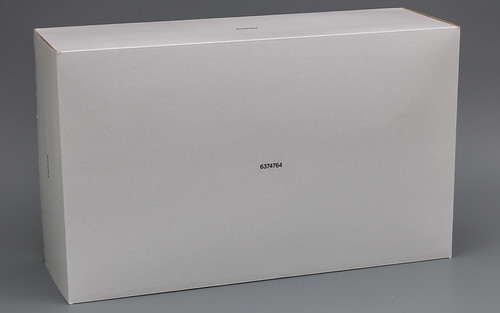 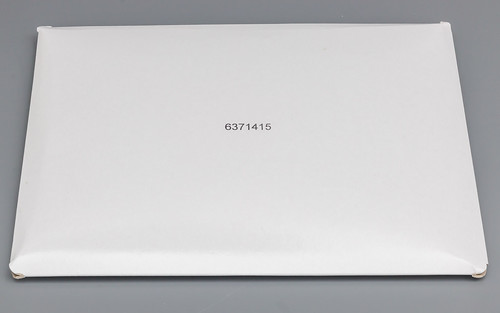 The picture below shows the contents of the inner box.

The envelop contains two booklets and a sticker sheet. 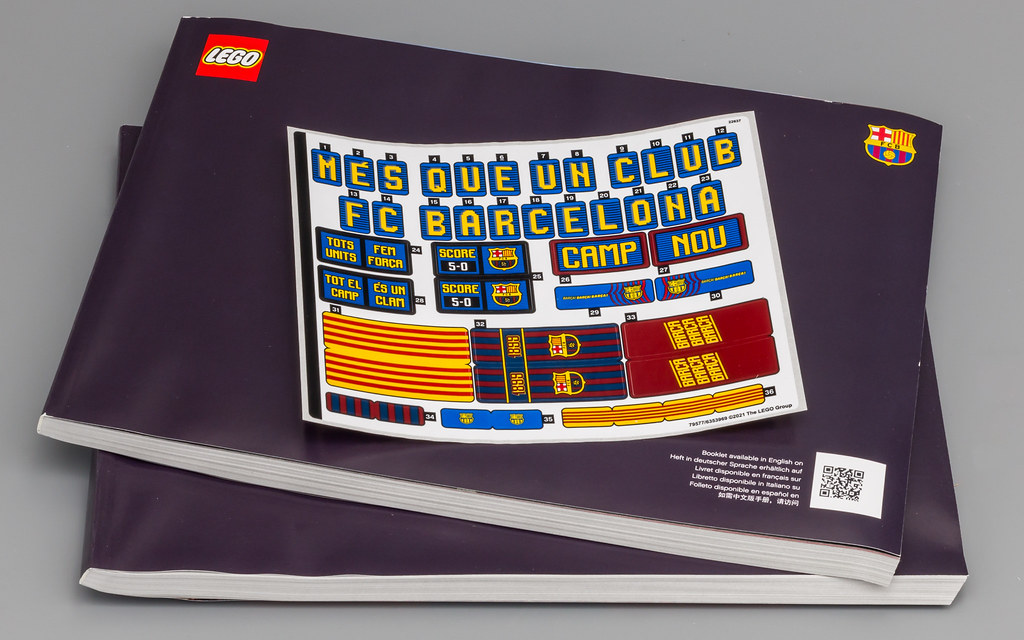 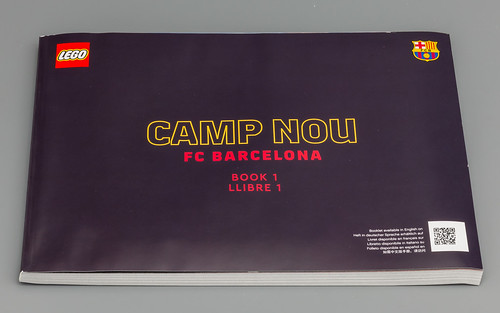 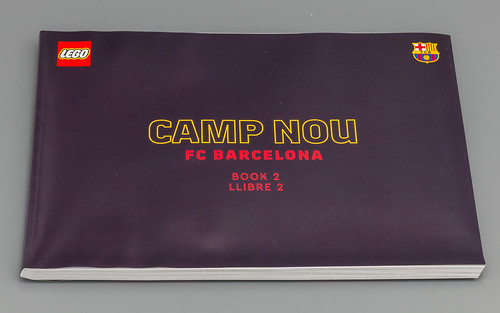 The sticker sheet contains all the letters used to write "Mes que un club" which translates to "More than a club" and "FC Barcelona". The score you see is their 5-0 win over Real Madrid, the rival of Barca. 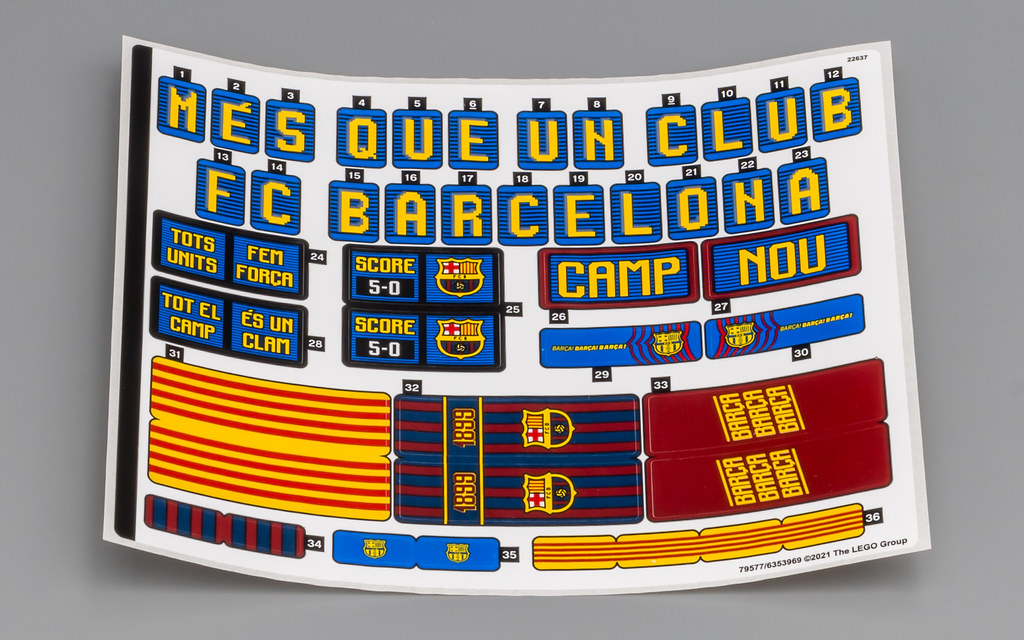 At the beginning of the first booklet there is some interesting information about the history of the club. 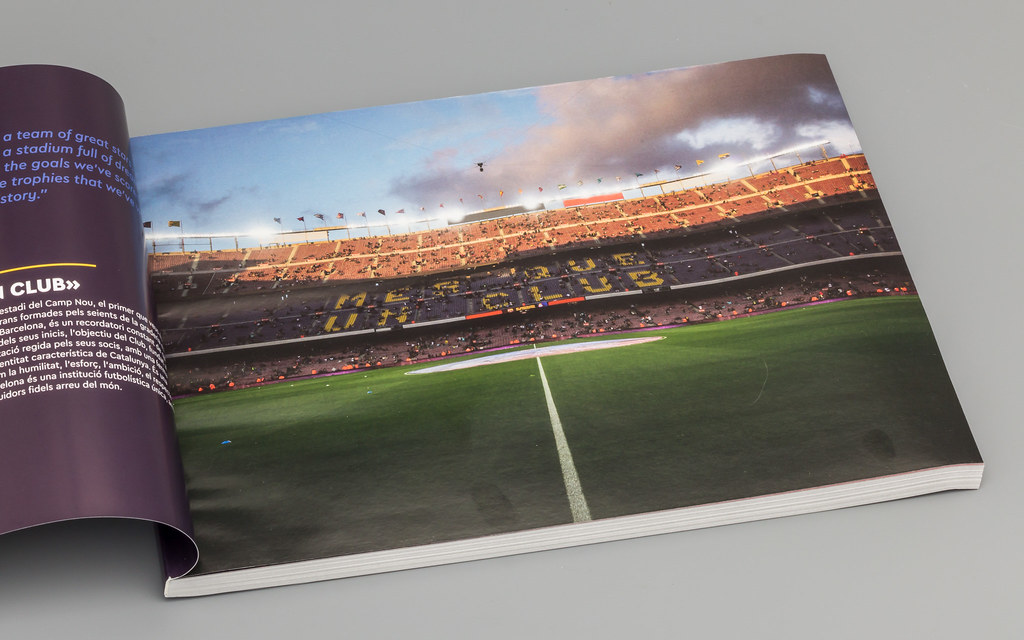 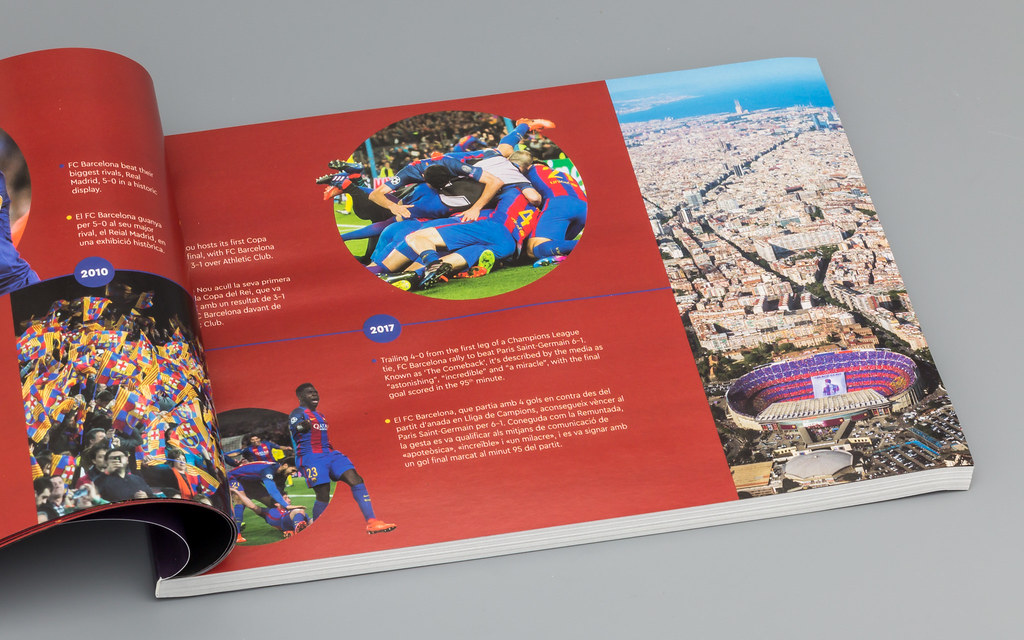 BAGS
In total there are 43 bags for a total of 32 steps. One of the bags is unnumbered, but it contains a numbered bag. I don't recall ever seeing this. 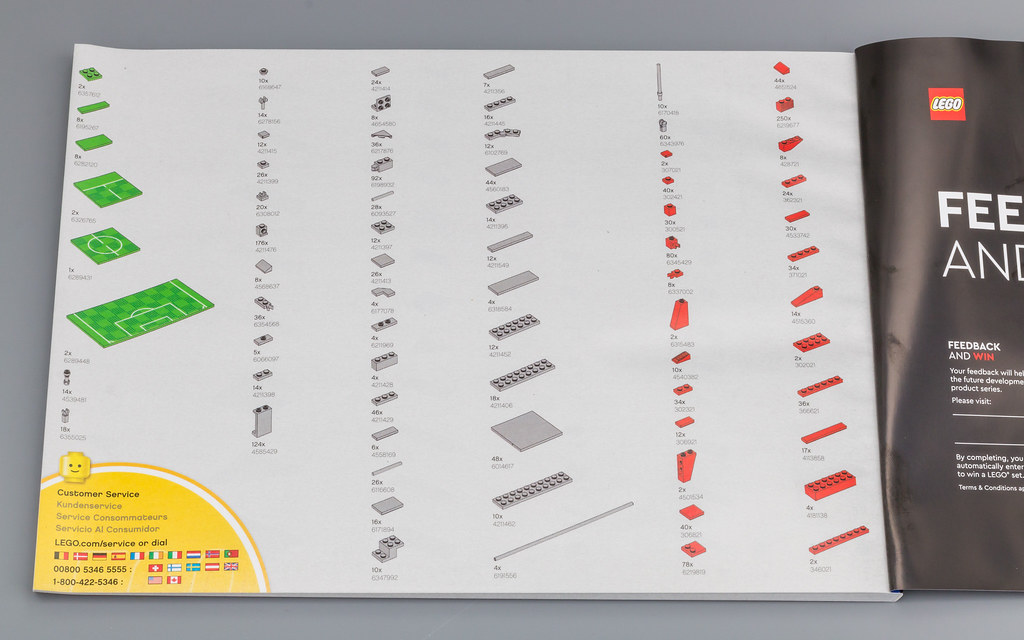 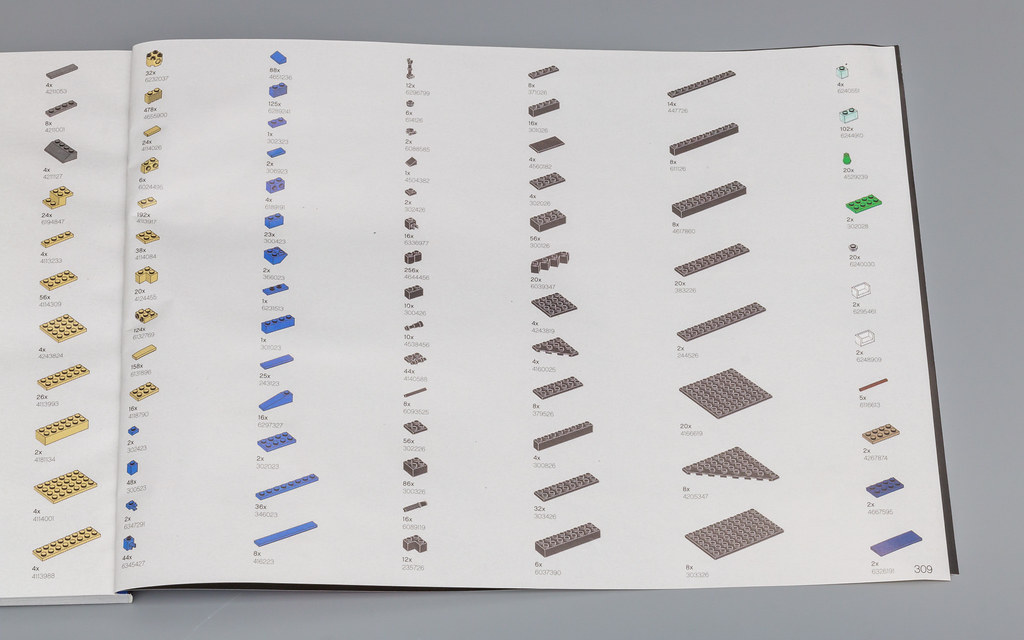 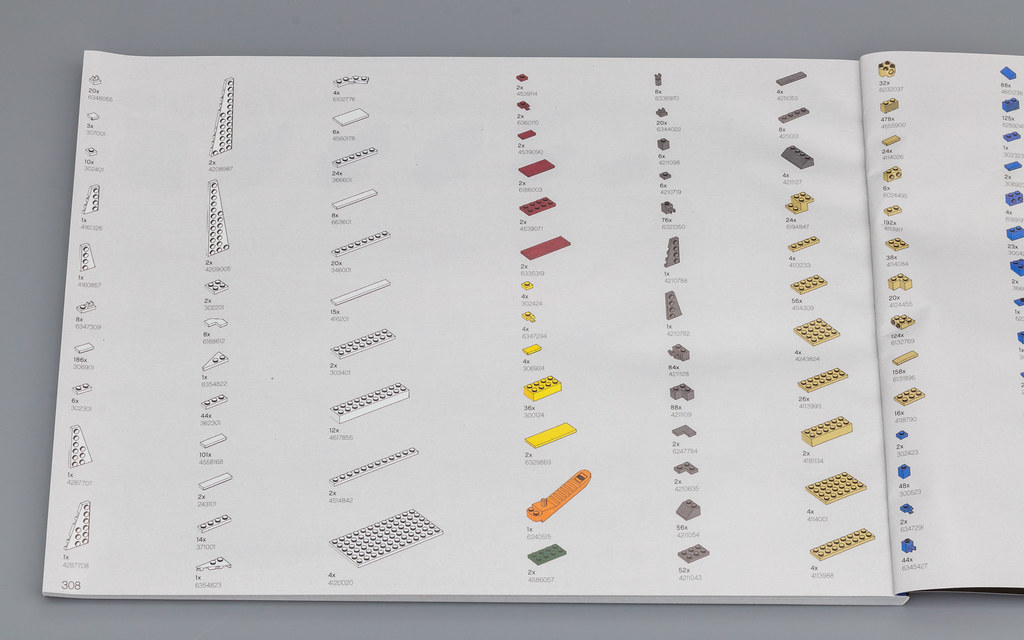 You start by building the pitch. Except for the corners, the pitch looks the same as the Old Trafford one, which makes sense. However, the midfield section is built using different parts. Old Trafford uses a single tiles, where Camp Nou uses three tiles. 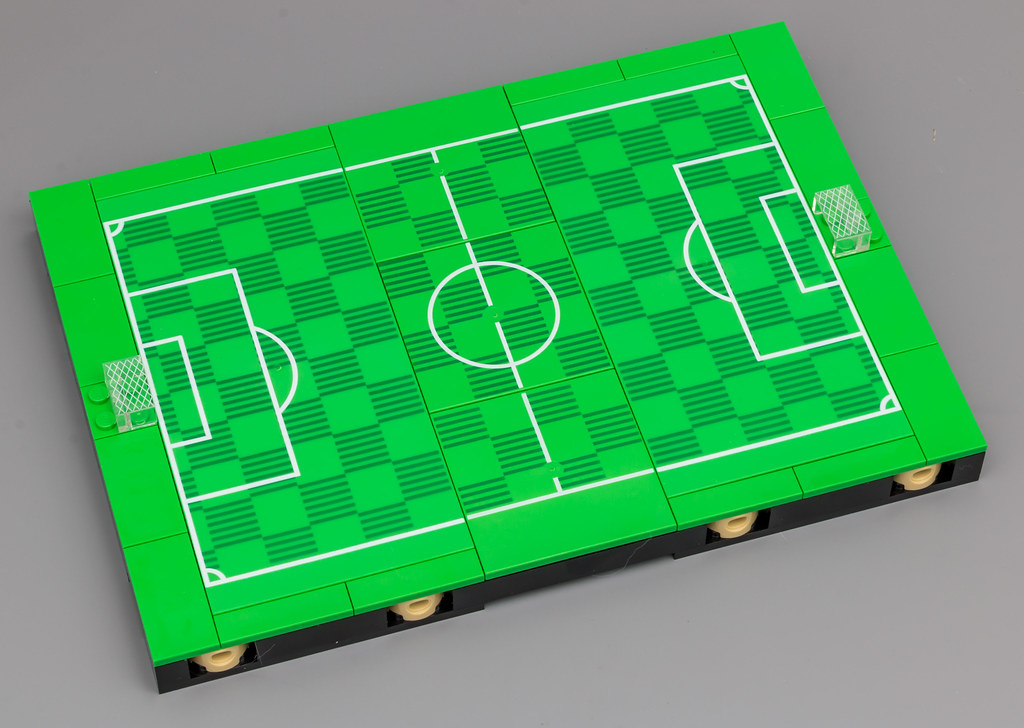 The picture below shows the shape of one of the quarter foundation sections. You will build four sections and slide them together. 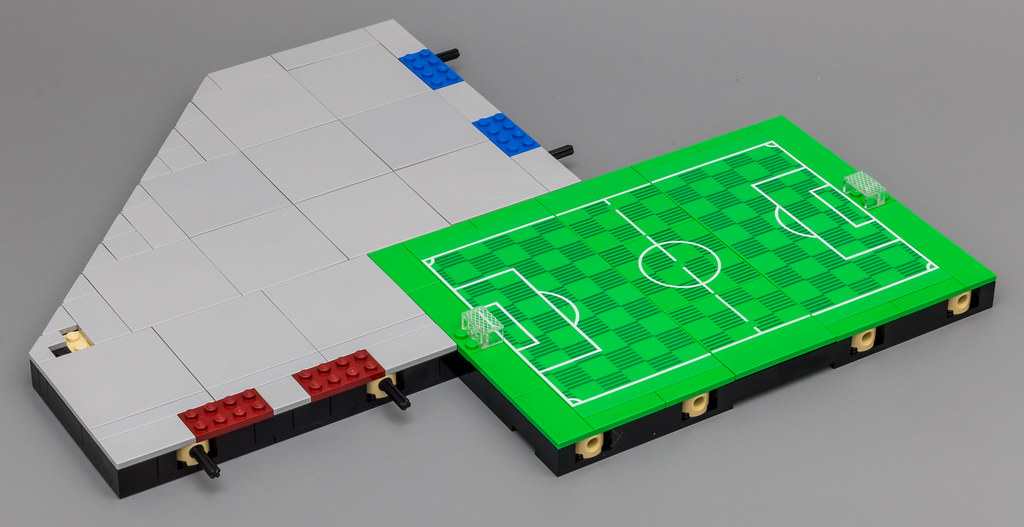 To be honest; this is basically what you will be building most of the time. Rinse and repeat. 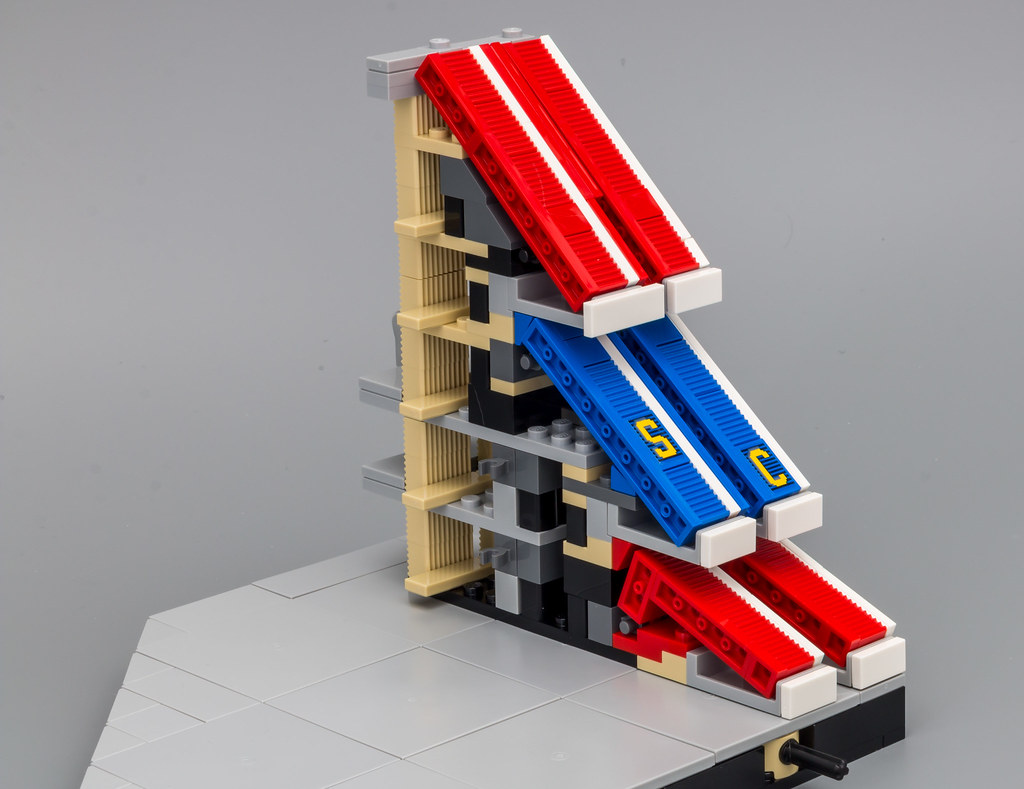 There is a slight variation in building the top ring, but the first and second are nearly identical. Each quarter stadium consists of 11 sections, so you will be building 44 sections. And yes, that S is upside down :tongue: 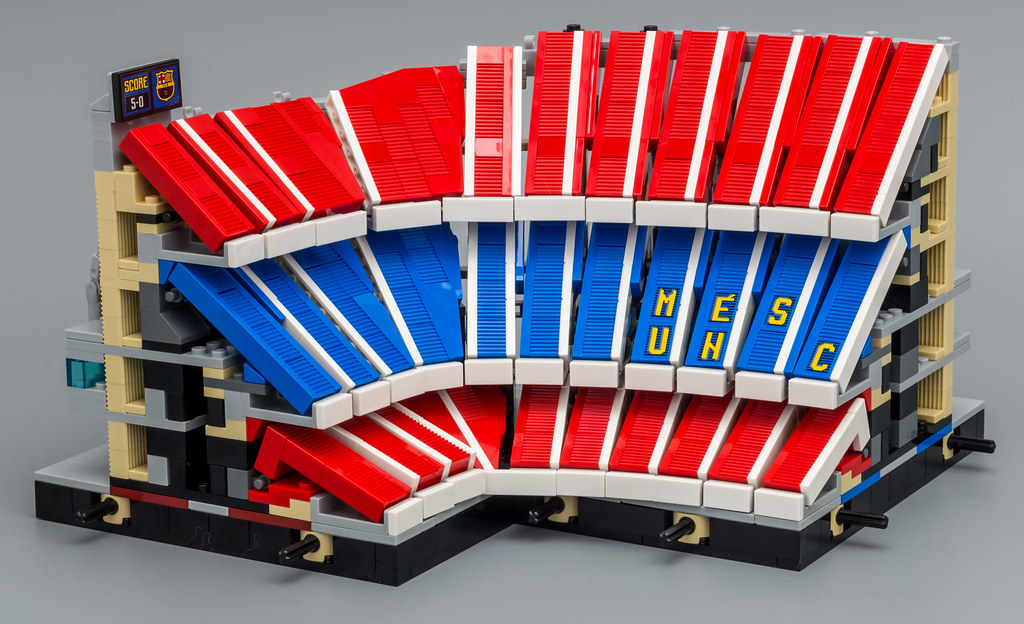 Completed half of the stadium. Each side contains some offices/business units. The rods aren't positioned correctly. They need to touch the building. 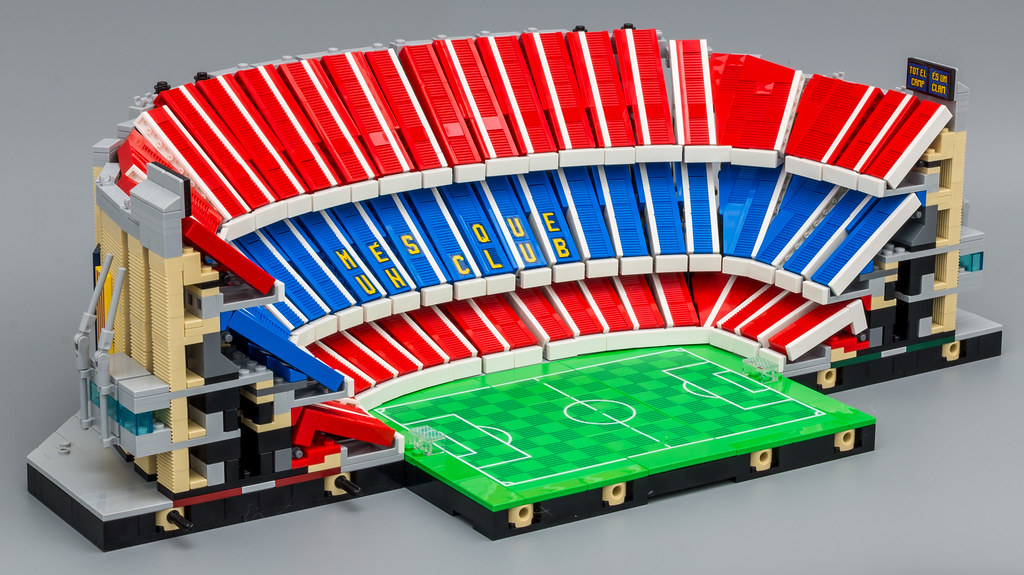 The penultimate quarter with the partial roof (awning) and one of the dugouts. By this time you will probably be done with building the sections. 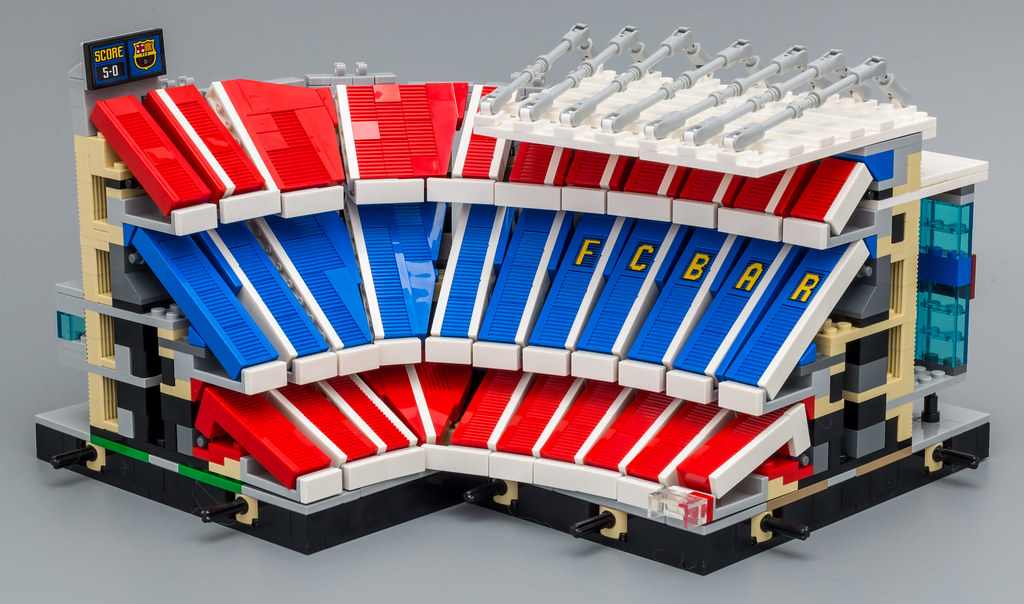 After building the last quarter and some railing on the top, you have finished the stadium! Except for the truck, there aren't a lot of extra details. The top ring with the lights, score boards and partial roof looks okay and adds some charme to the stadium. And obvisouly the finished set does look impressive, due to its size. 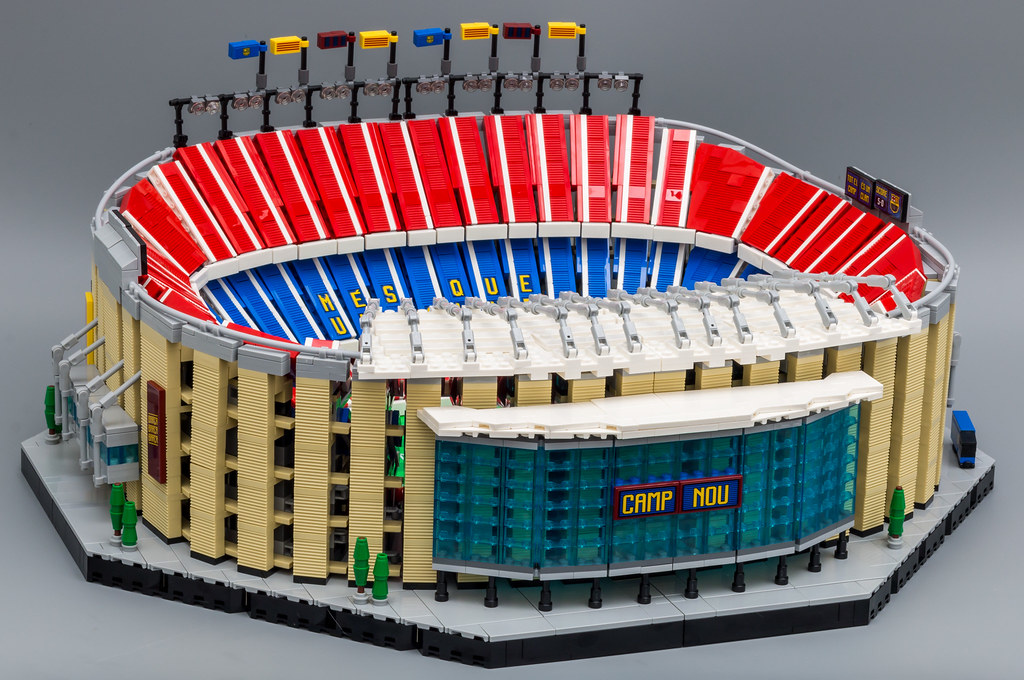 I do like how the partial roof (or rather, a big awning) has been built. That looks great and it would have made the stadium look cooler if the actual stadium had a this around the entire stadium. 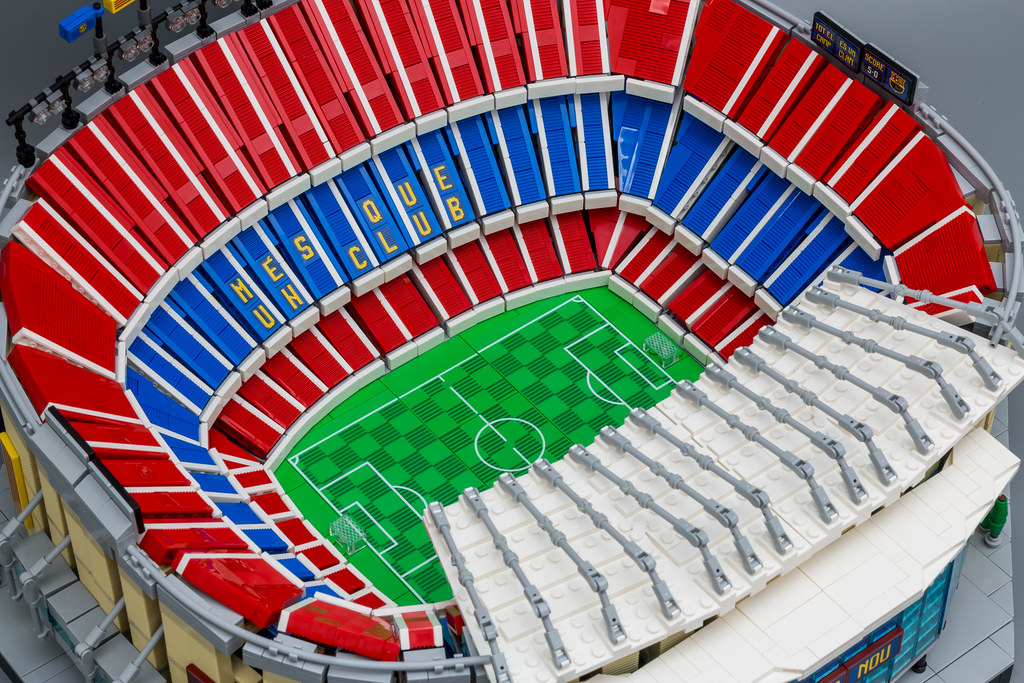 One of the pillars has been slightly bent when attaching the railing. Since the real stadium is almost falling apart, this adds to the realism hehe :wink: 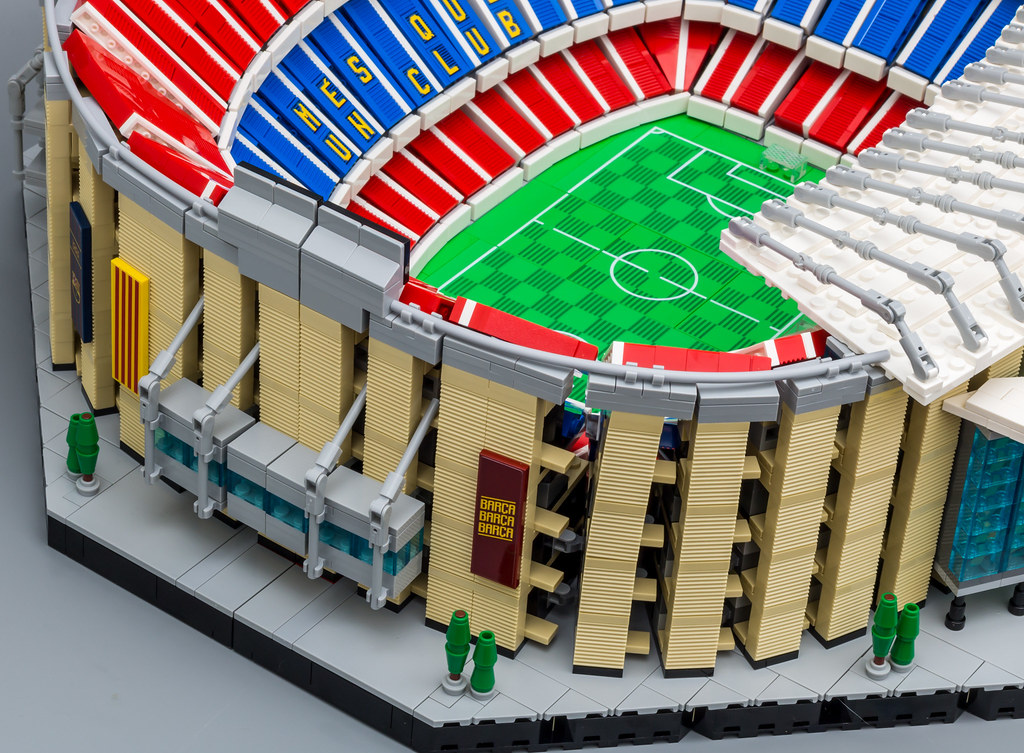 A picture from the other side of the stadium showing the entire awning and both dugouts. All in all I do like the end result. The stadium looks properly impressive, but there isn't a lot to be seen. 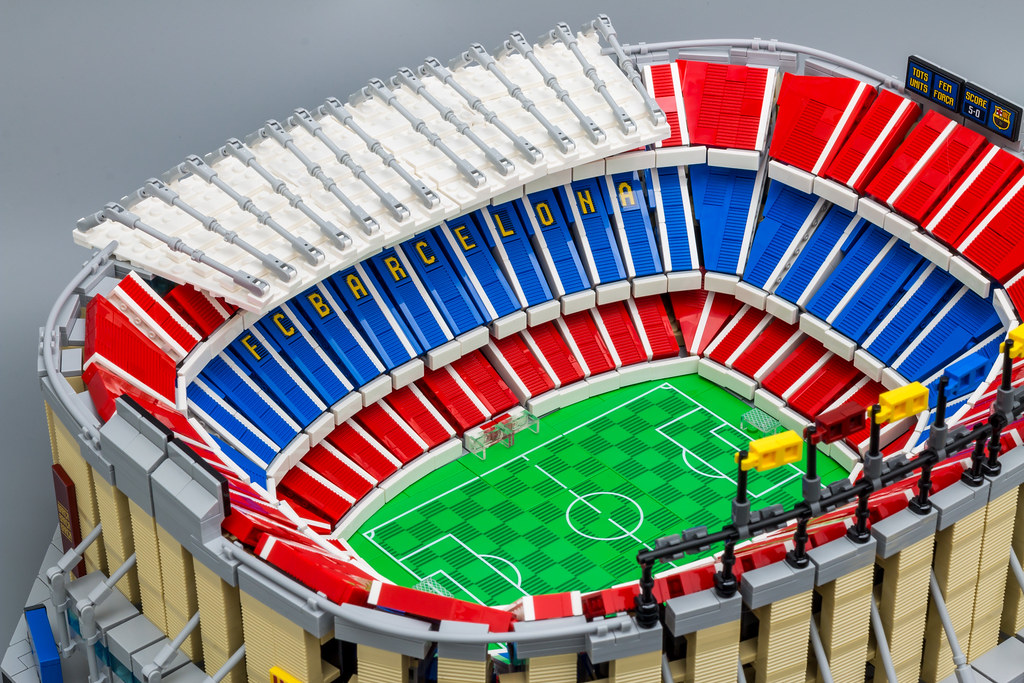 Writing this review felt kinda boring and I am sorry if the review IS a bit boring. But there was simply not a lot to talk about. The build is repetitive and it's not the most enjoyable. It feels like something you need to do in order to get to the end result. So this build is not about the journey, but about the destination.

And is that destination worth it? I am not really sure about it. If you are a big Barca or soccer/football fan and have some display space, you might want to add this to your collection. If you are planning on making your own stadium, this may be a nice starter kit, a rather expensive starter kit though. Some people will be over the moon with this set and other people could not care less. I am somewhat in the middle after building the set.

Before I started building this set, I was contemplating on getting Old Trafford to start my stadium collection, but after this build, I think I will leave it at that. Maybe I will change my mind if the rumored Real Madrid stadium has been released, but I highly doubt it. I do appreciate TLG releasing these sets, but I will probably do with some pictures in the future.

To end with a more positive note; the final model is impressive and the overall design is on par with the real stadium. it's instantly recognizable. So this is a proper LEGO version of the Camp Nou stadium!

How do I rate this set?

Design is impressive and on par with the real stadium.

Too repetitive to be really enjoyable.

No extra features besides being a stadium.

This being a display set, it hardly has any playability.

Decent parts pack, but not a lot of variation.

Expensive, but you do get a lot of parts.

6,7 ONLY FOR TRUE BARCA FANS